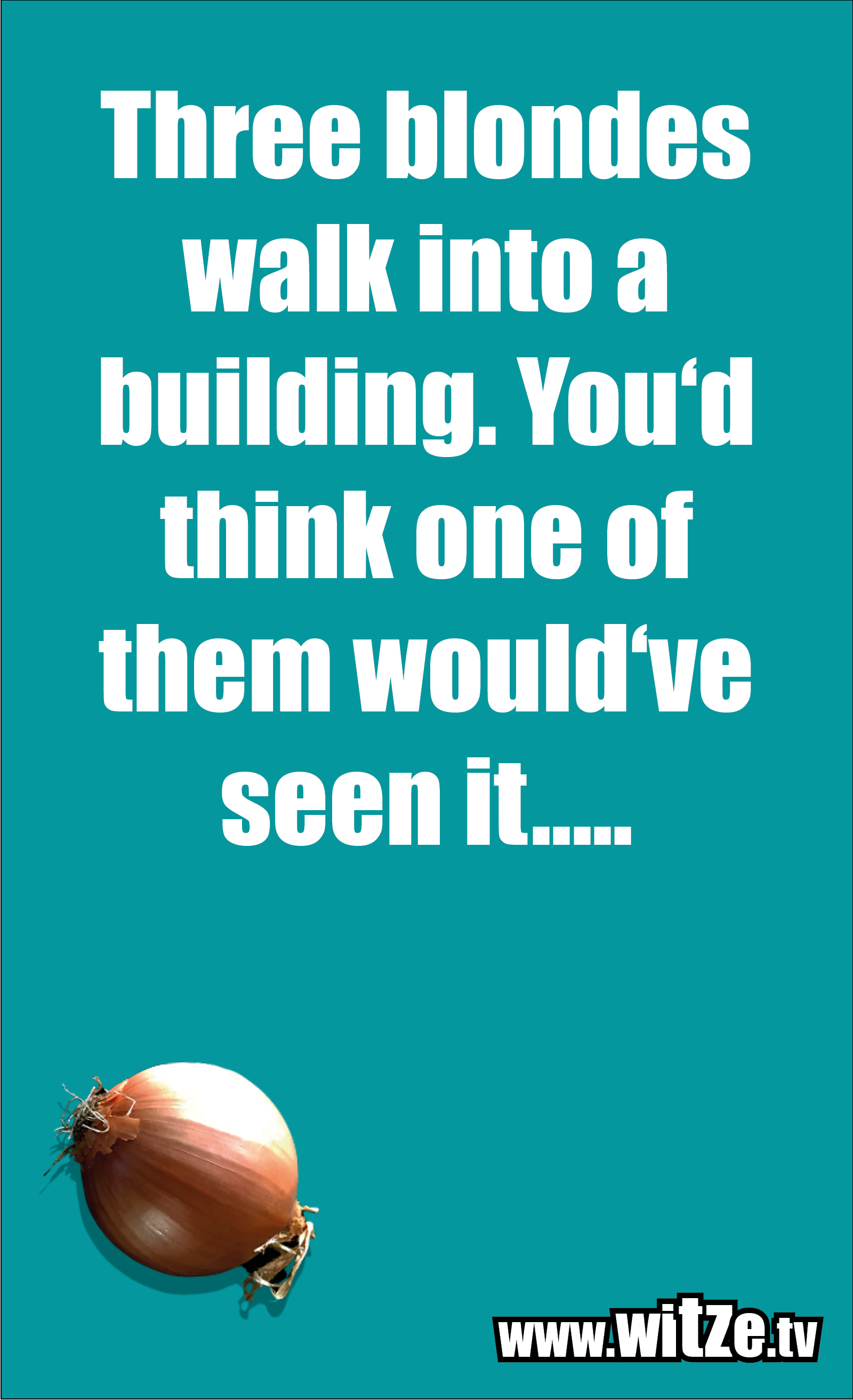 Three blondes walk into a building. You’d think one of them would’ve seen it….. 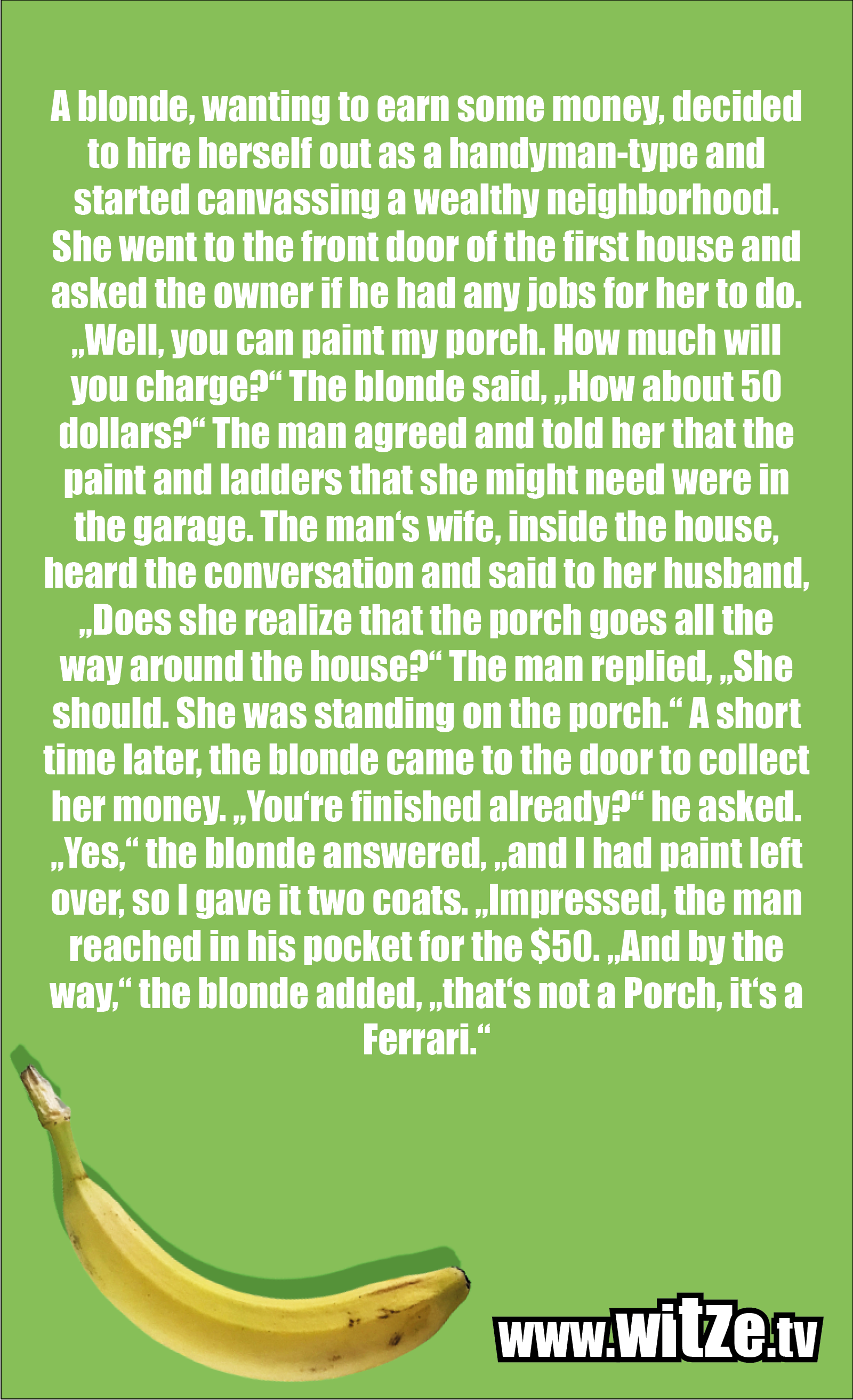 A blonde, wanting to earn some money, decided to hire herself out as a handyman-type and started canvassing a wealthy neighborhood. She went to the front door of the first house and asked the owner if he had any jobs for her to do. “Well, you can paint my porch. How much will you charge?” … Read more 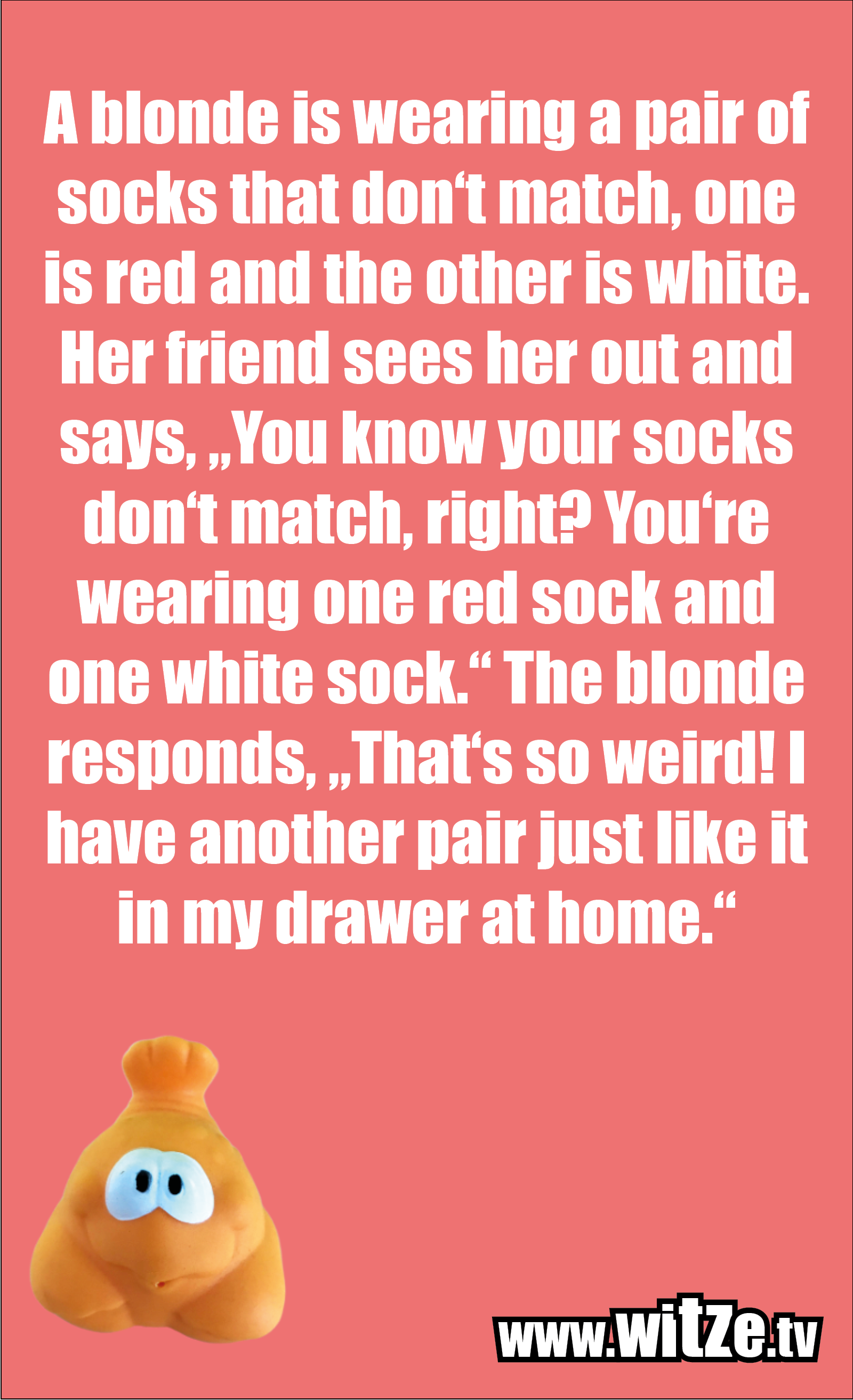 A blonde is wearing a pair of socks that don’t match, one is red and the other is white. Her friend sees her out and says, “You know your socks don’t match, right? You’re wearing one red sock and one white sock.” The blonde responds, “That’s so weird! I have another pair just like it … Read more 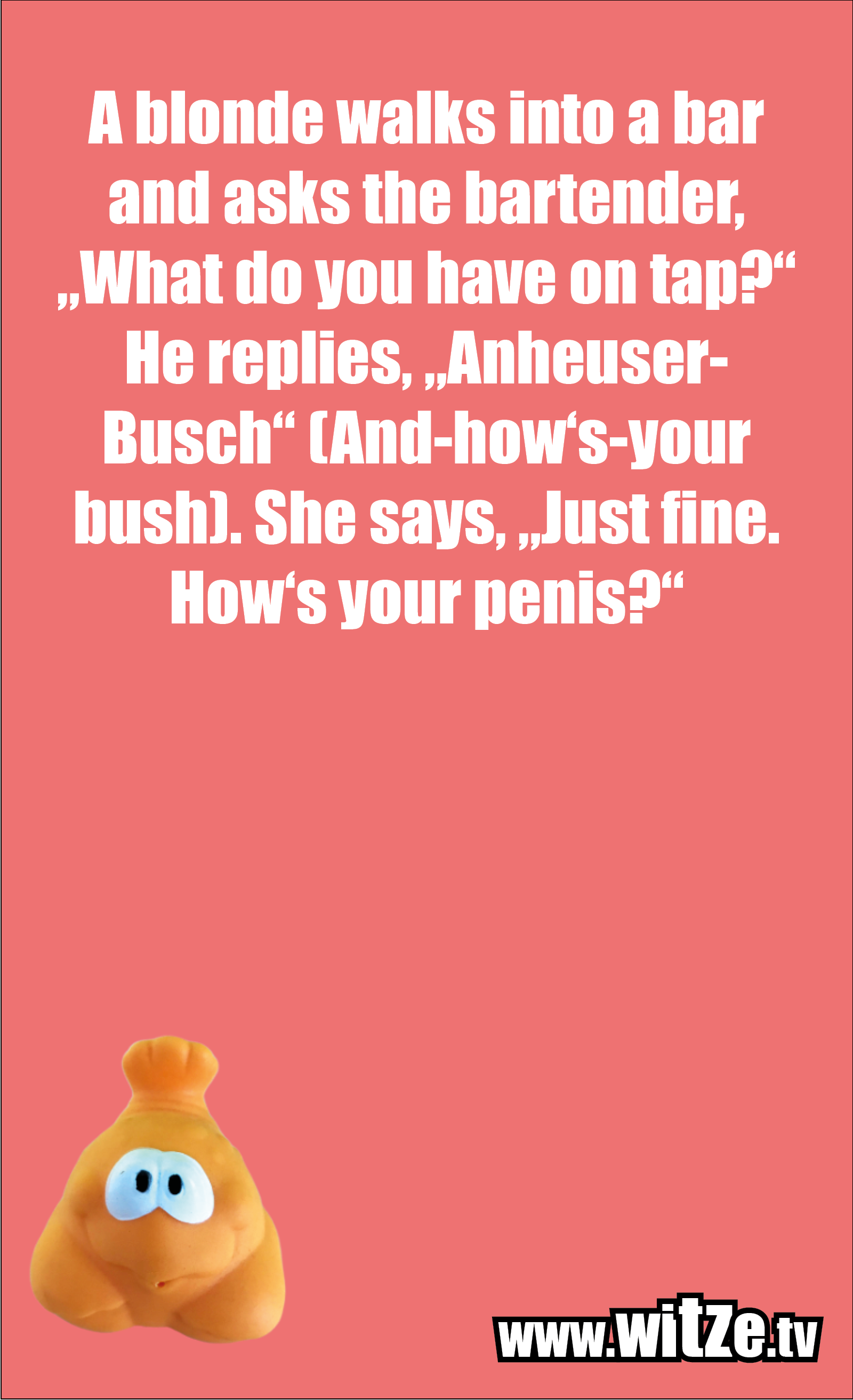 A blonde walks into a bar and asks the bartender, “What do you have on tap?” He replies, “Anheuser-Busch” (And-how’s-your bush). She says, “Just fine. How’s your penis?” 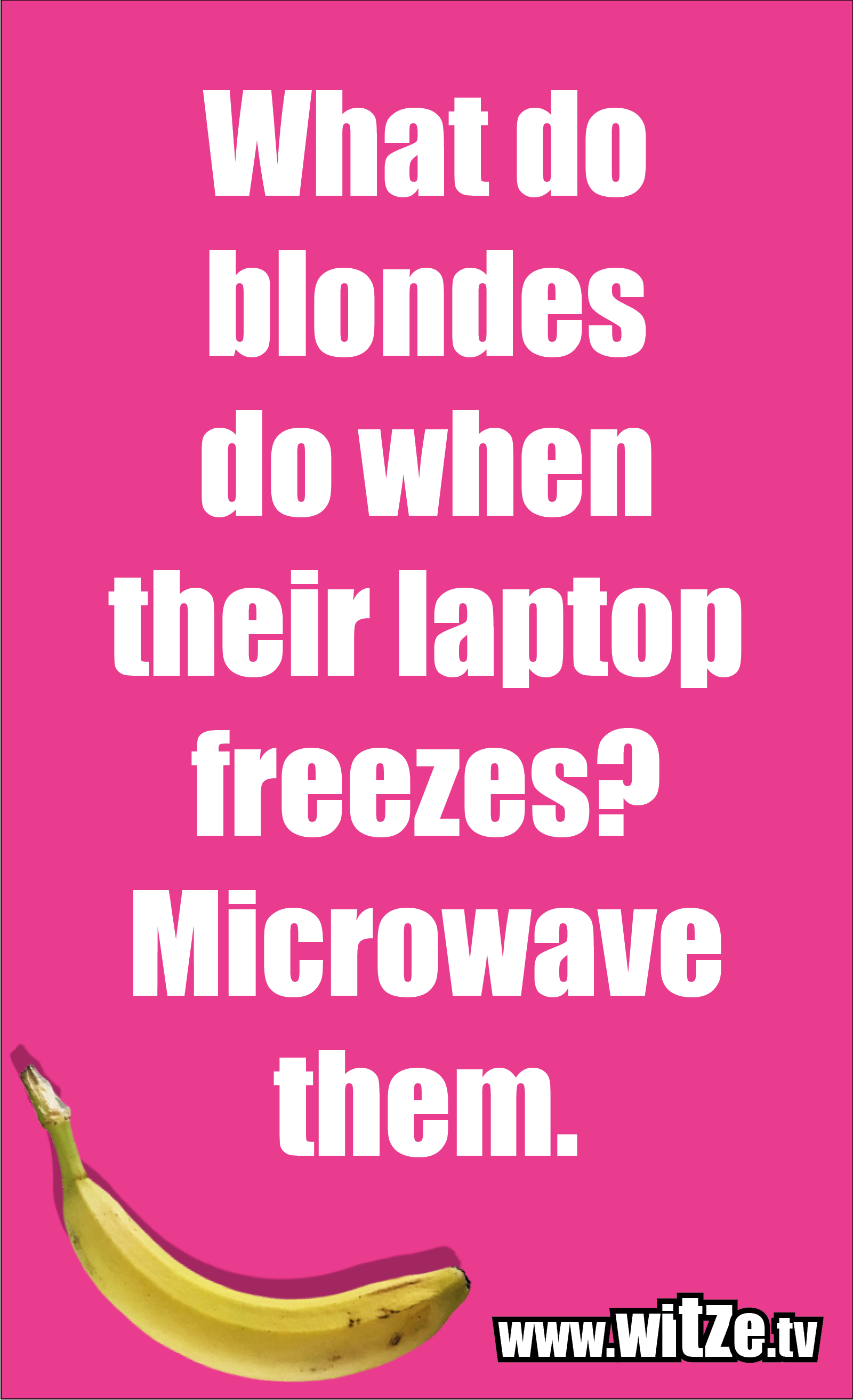 What do blondes do when their laptop freezes? Microwave them. 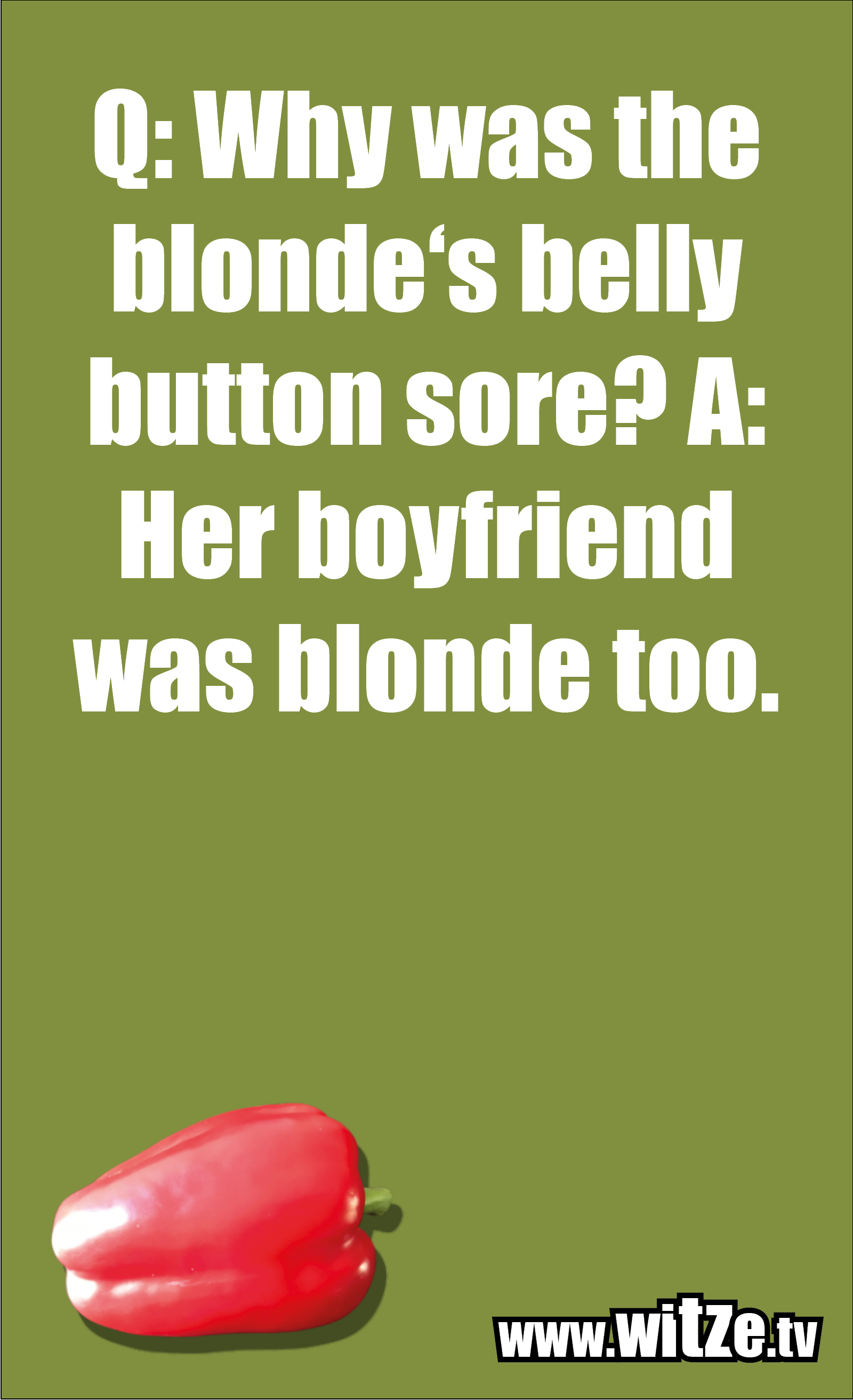 Q: Why was the blonde’s belly button sore? A: Her boyfriend was blonde too. 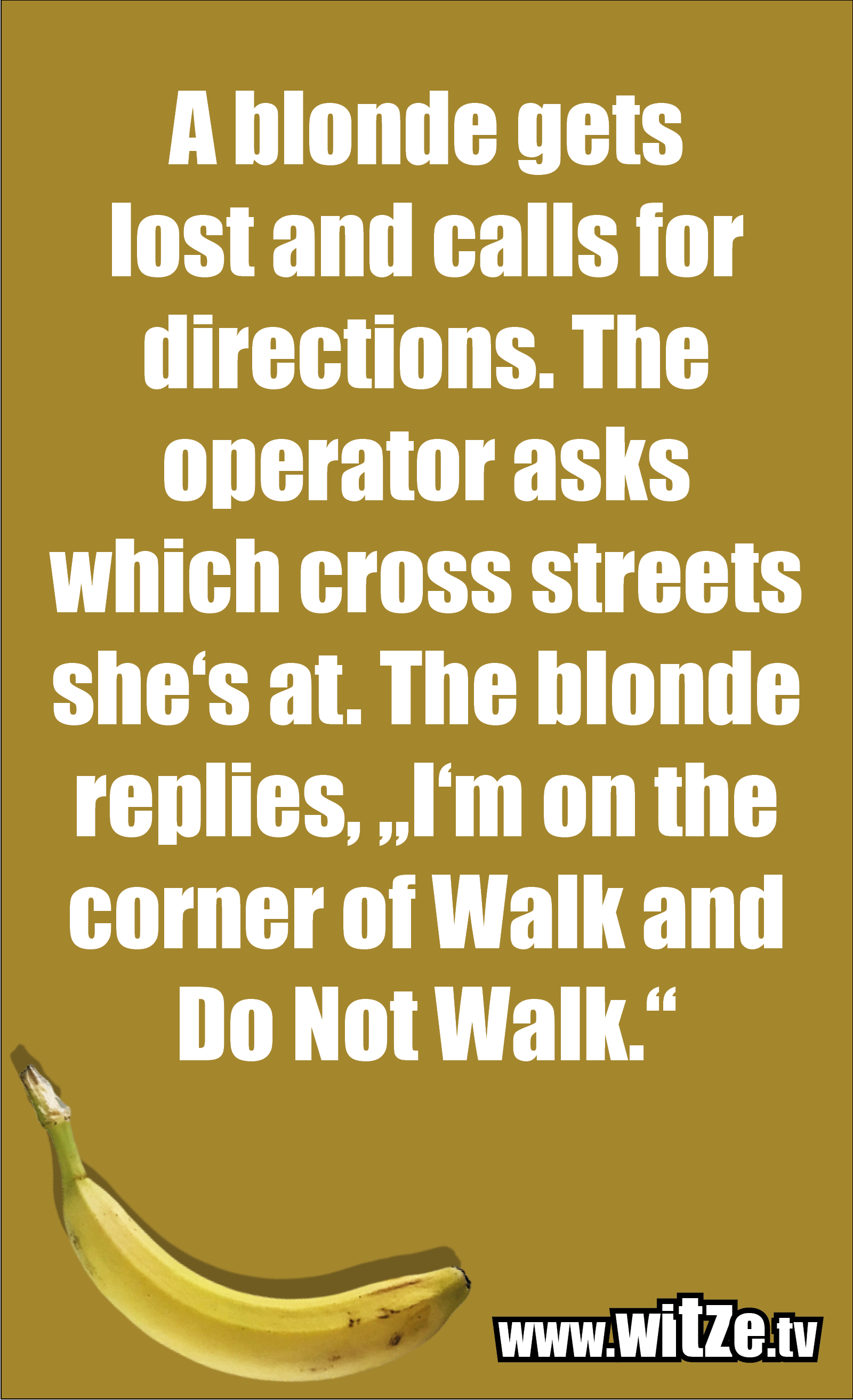 A blonde gets lost and calls for directions. The operator asks which cross streets she’s at. The blonde replies, “I’m on the corner of Walk and Do Not Walk.” 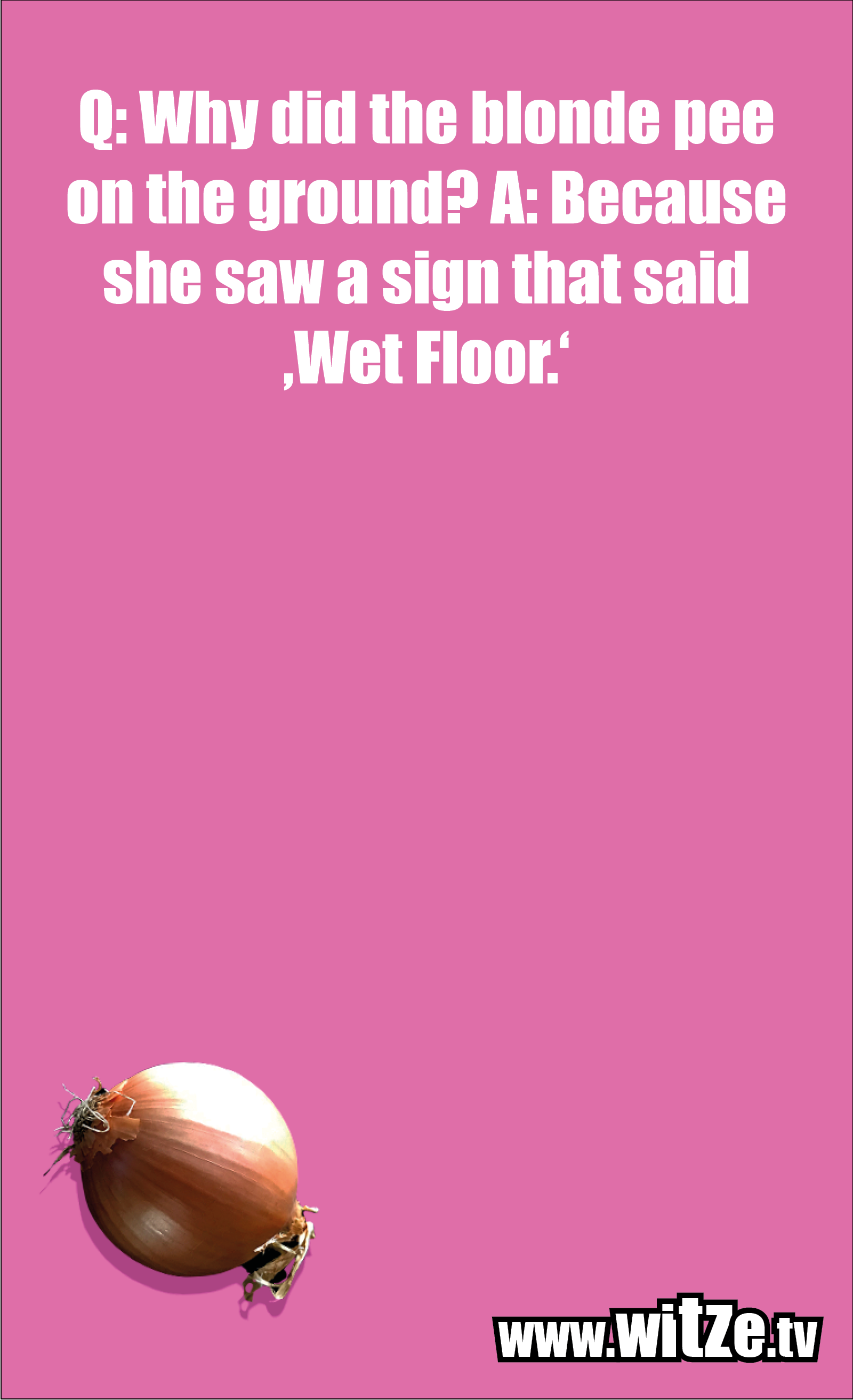 A: Because she saw a sign that said ‘Wet Floor.’ 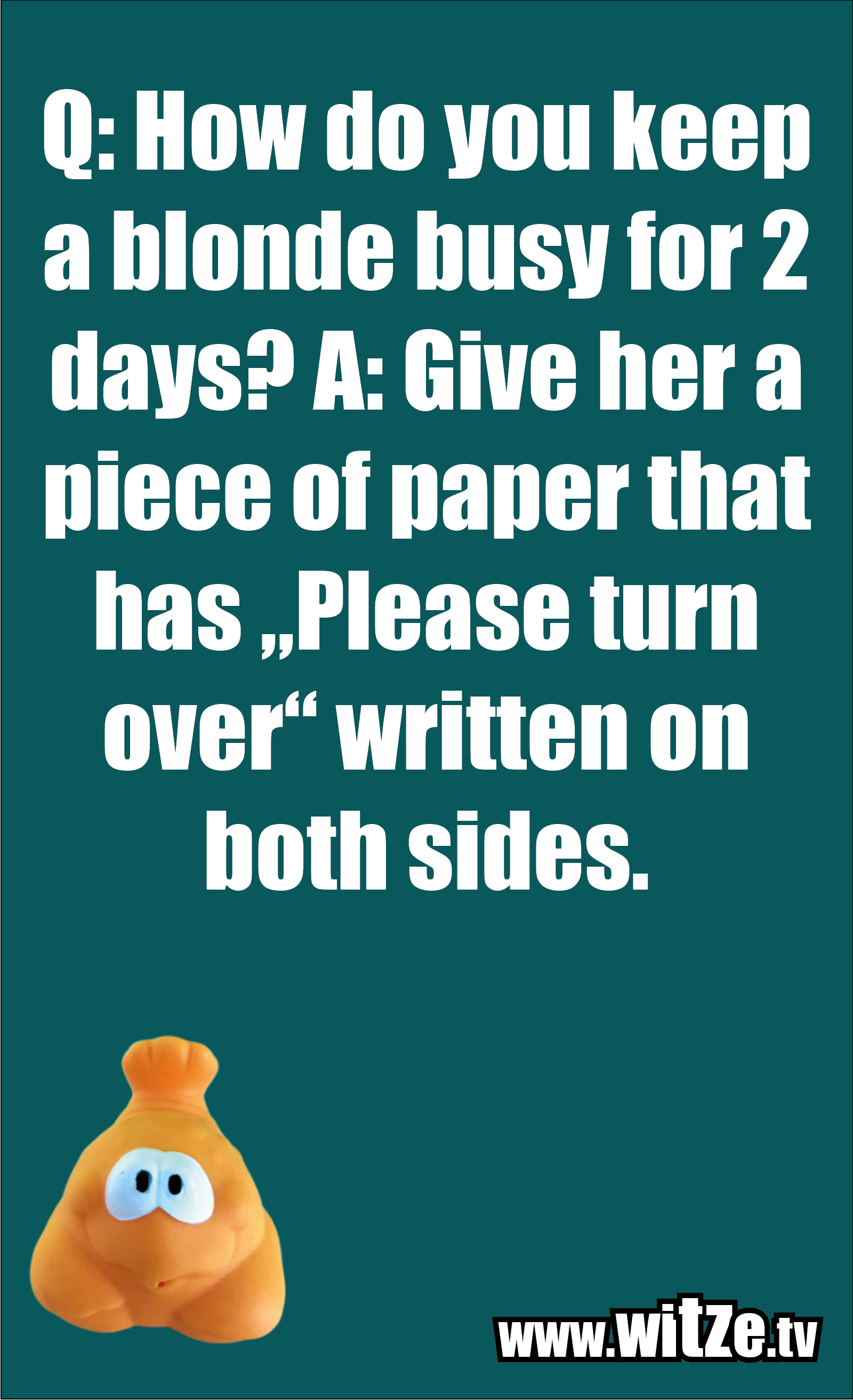 Q: How do you keep a blonde busy for 2 days? A: Give her a piece of paper that has “Please turn over” written on both sides. 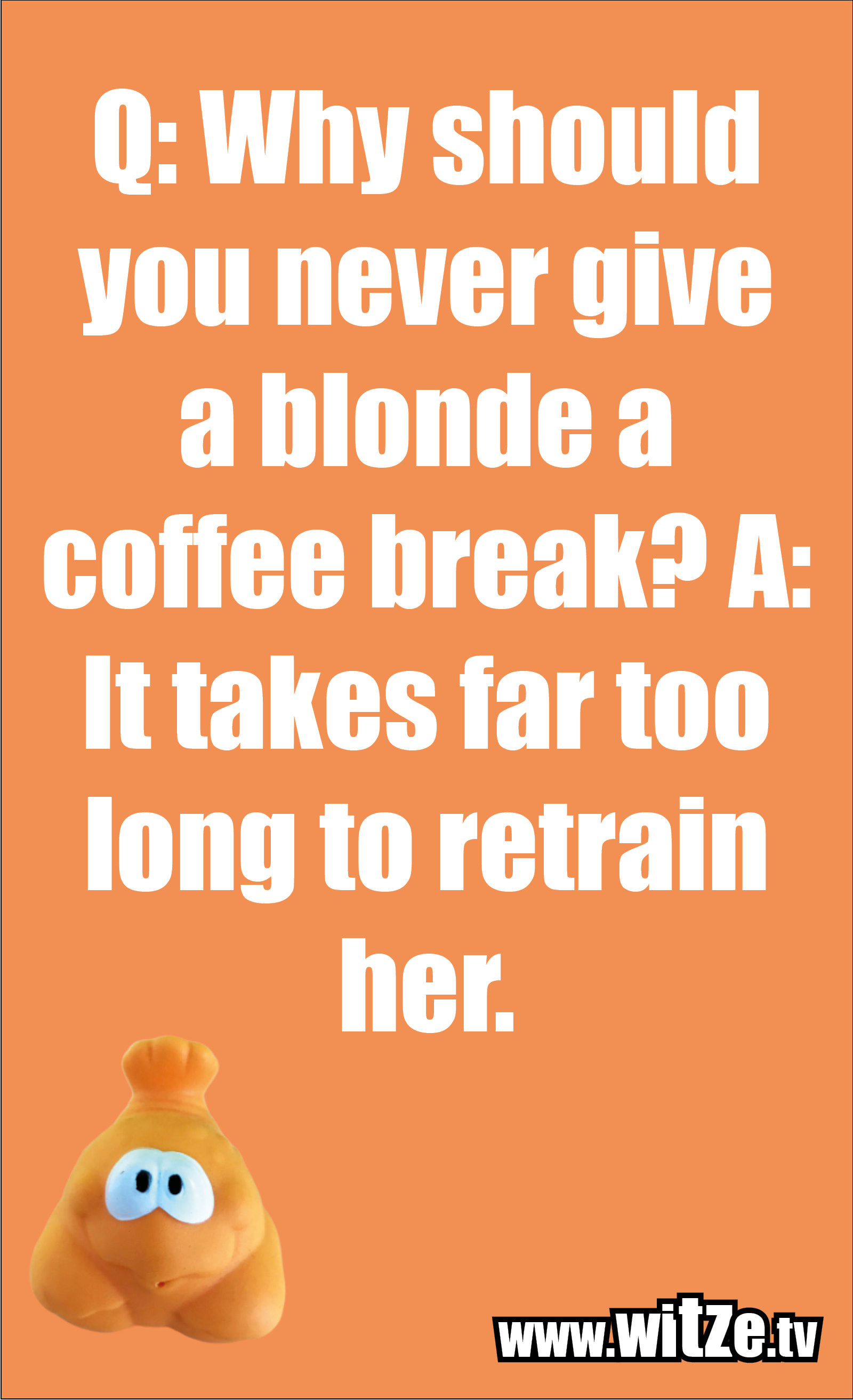 Q: Why should you never give a blonde a coffee break? A: It takes far too long to retrain her. 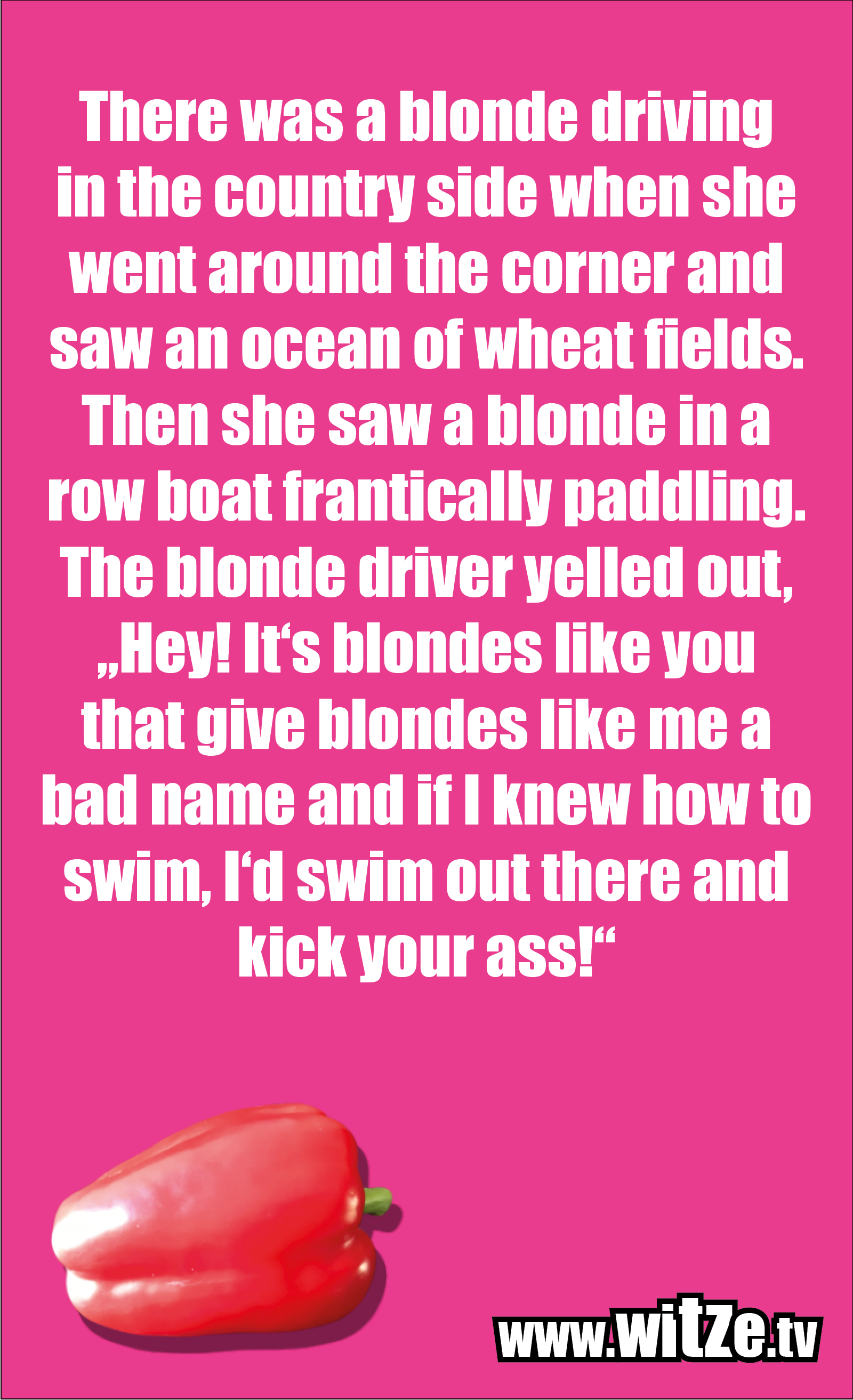 There was a blonde driving in the country side when she went around the corner and saw an ocean of wheat fields. Then she saw a blonde in a row boat frantically paddling. The blonde driver yelled out, “Hey! It’s blondes like you that give blondes like me a bad name and if I knew … Read more 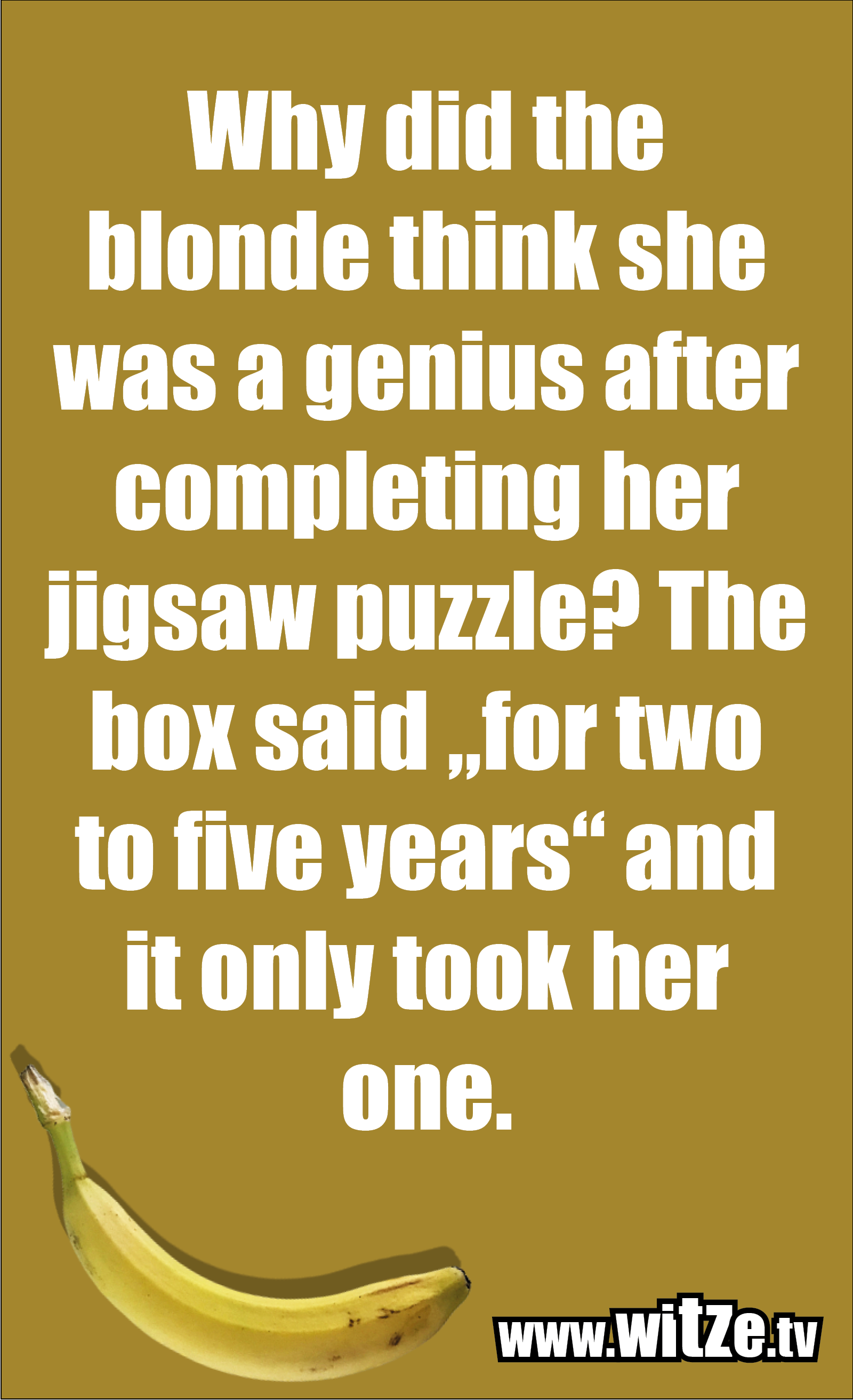 Why did the blonde think she was a genius after completing her jigsaw puzzle? The box said “for two to five years” and it only took her one. 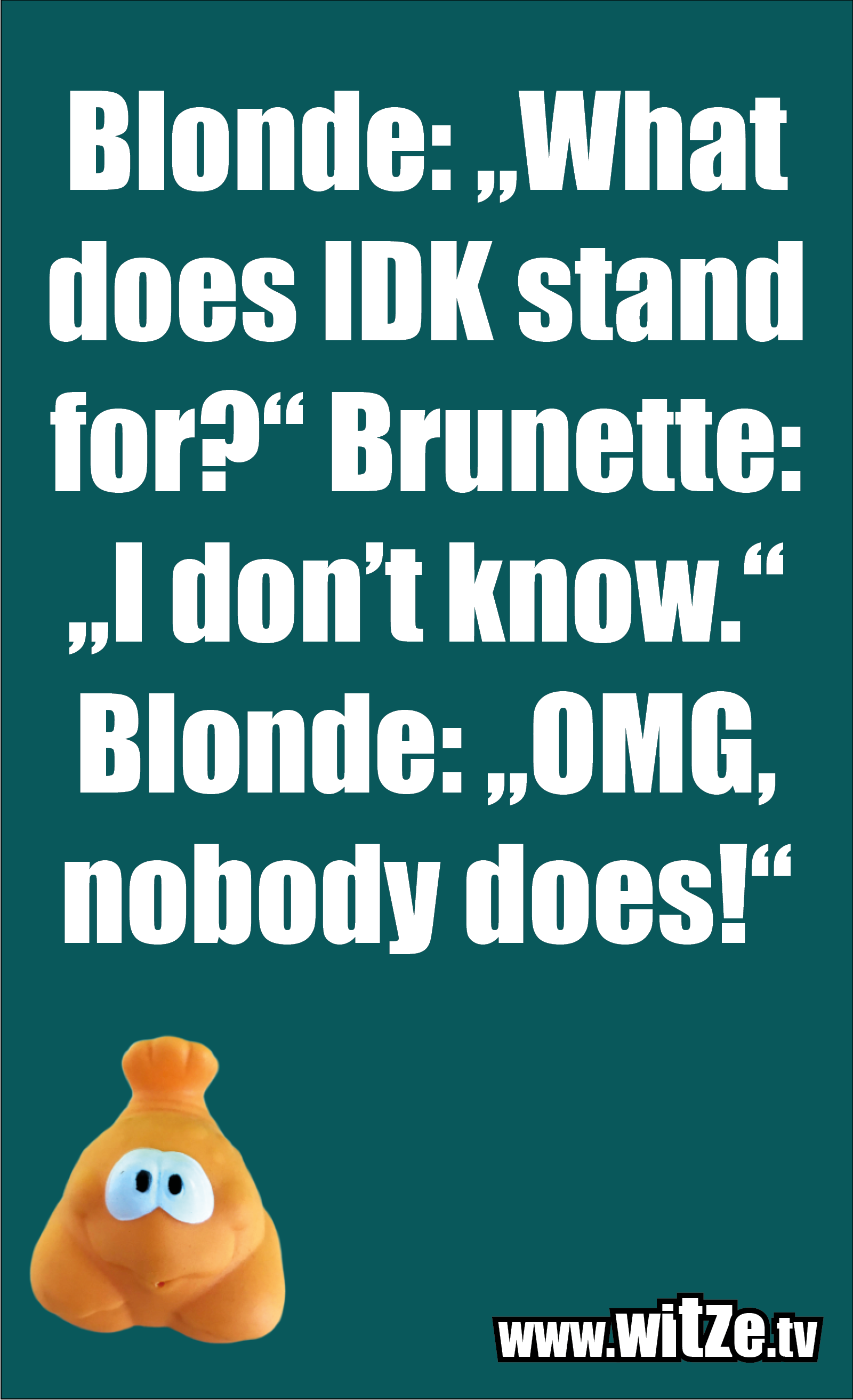 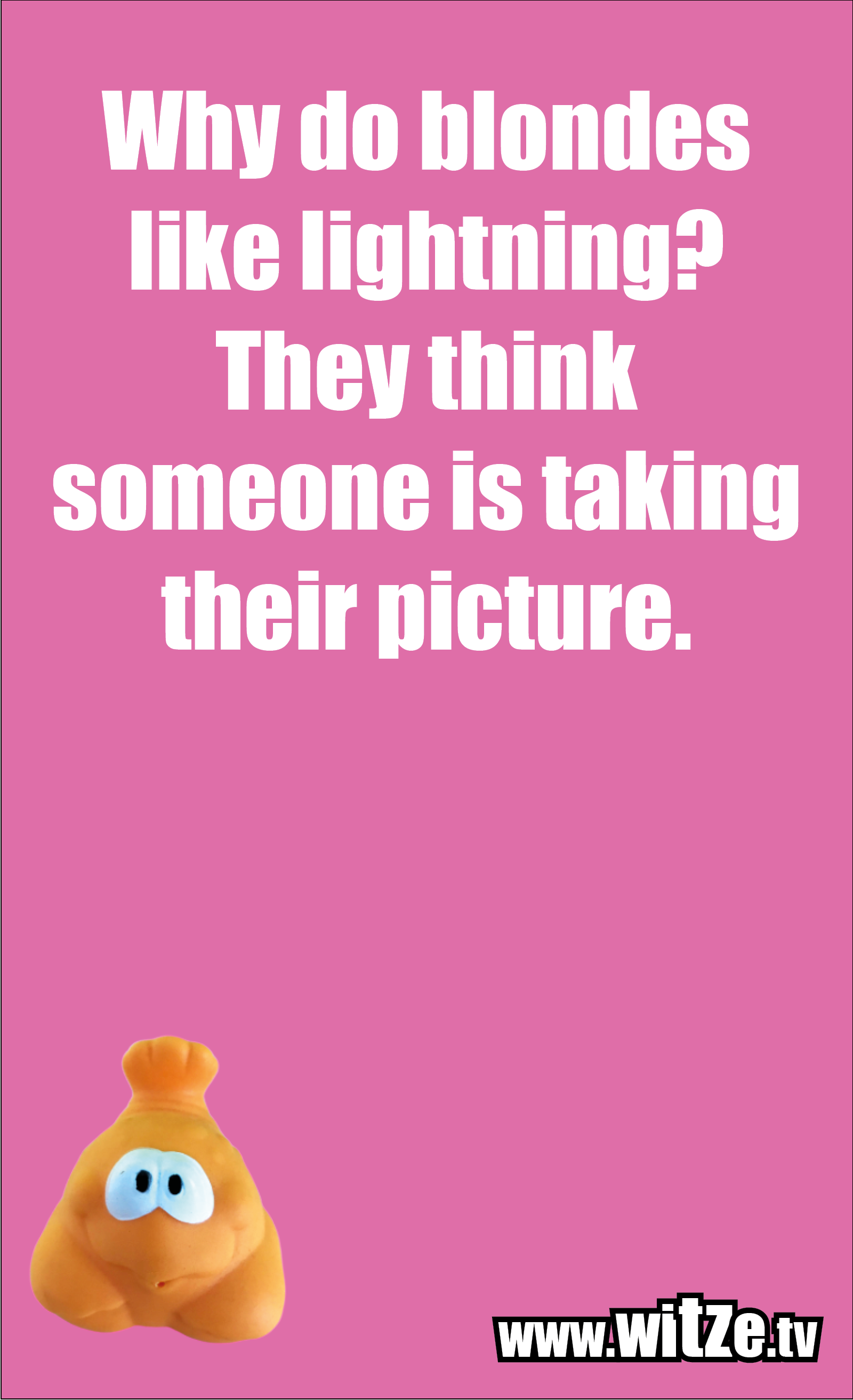 Why do blondes like lightning? They think someone is taking their picture. 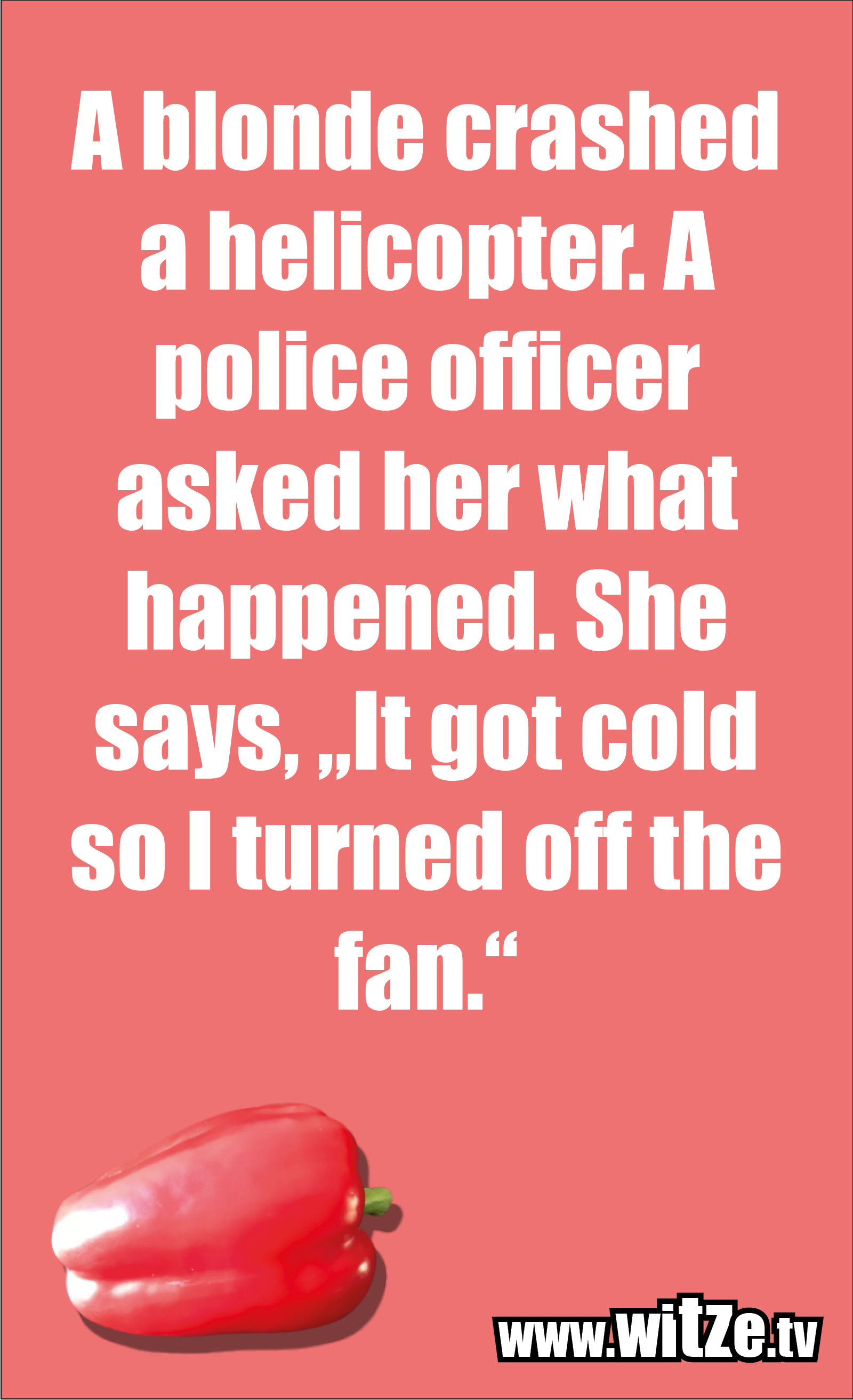 A blonde crashed a helicopter. A police officer asked her what happened. She says, “It got cold so I turned off the fan.” 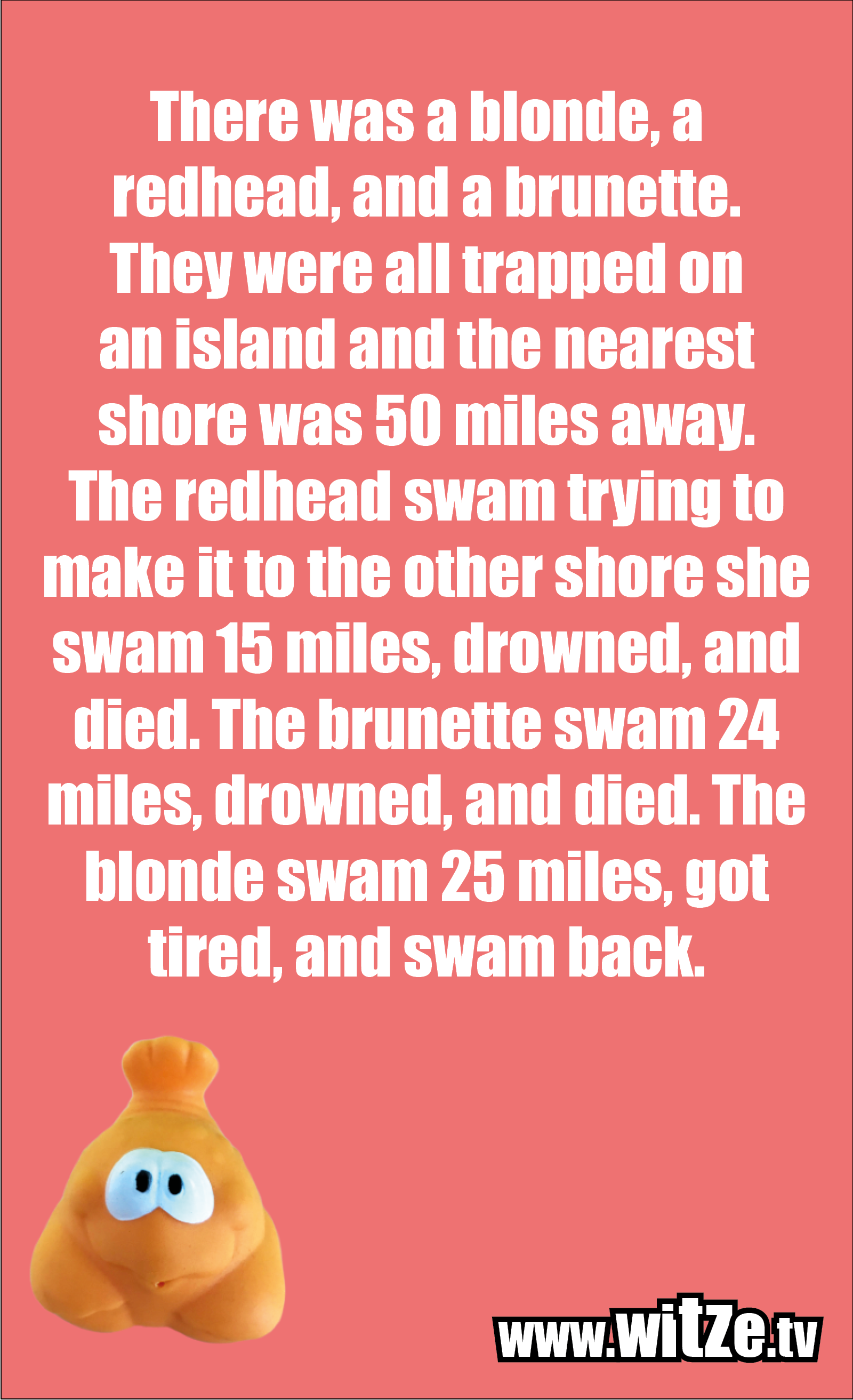 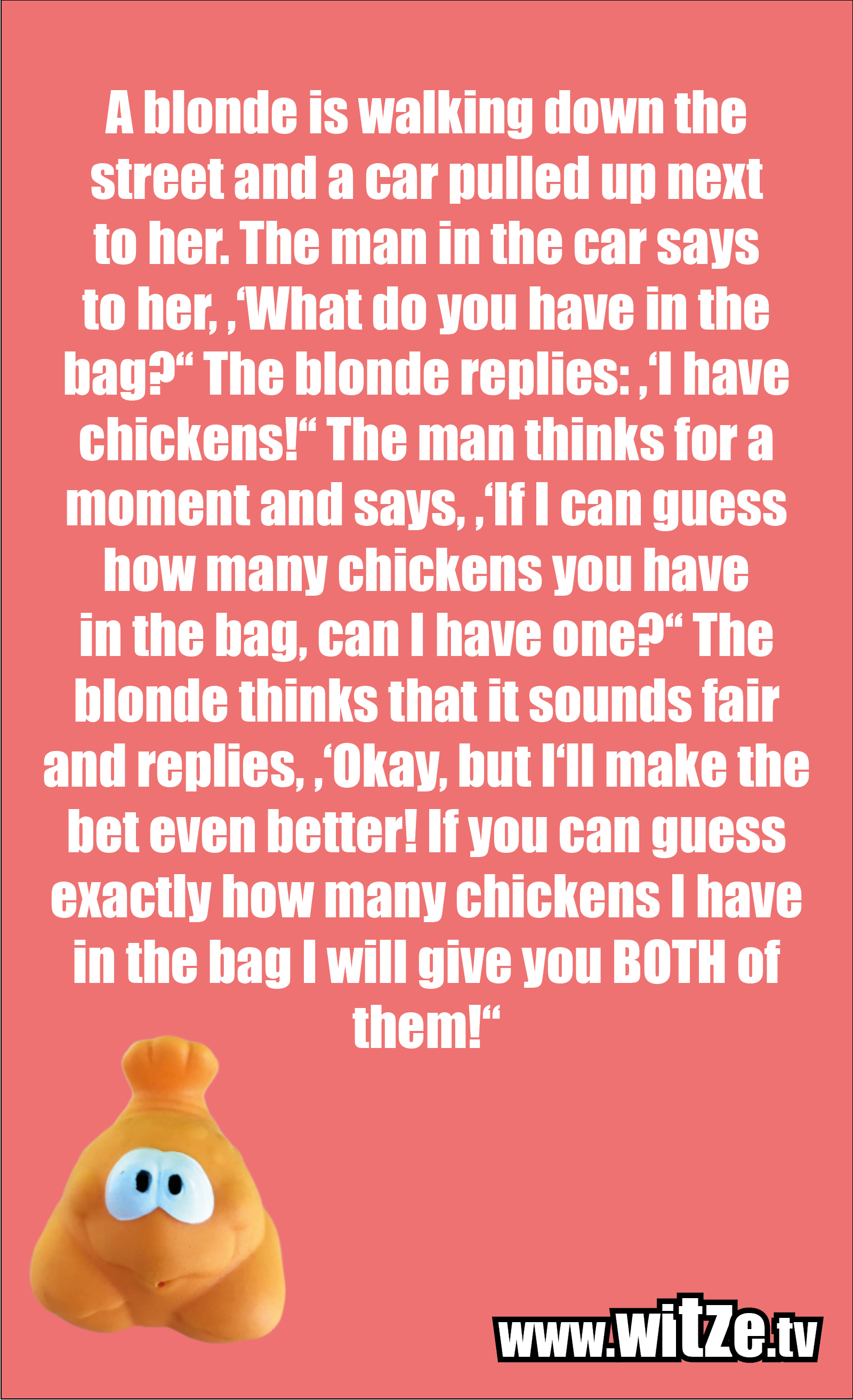 A blonde is walking down the street and a car pulled up next to her. The man in the car says to her, ”What do you have in the bag?” The blonde replies: ”I have chickens!” The man thinks for a moment and says, ”If I can guess how many chickens you have in the … Read more 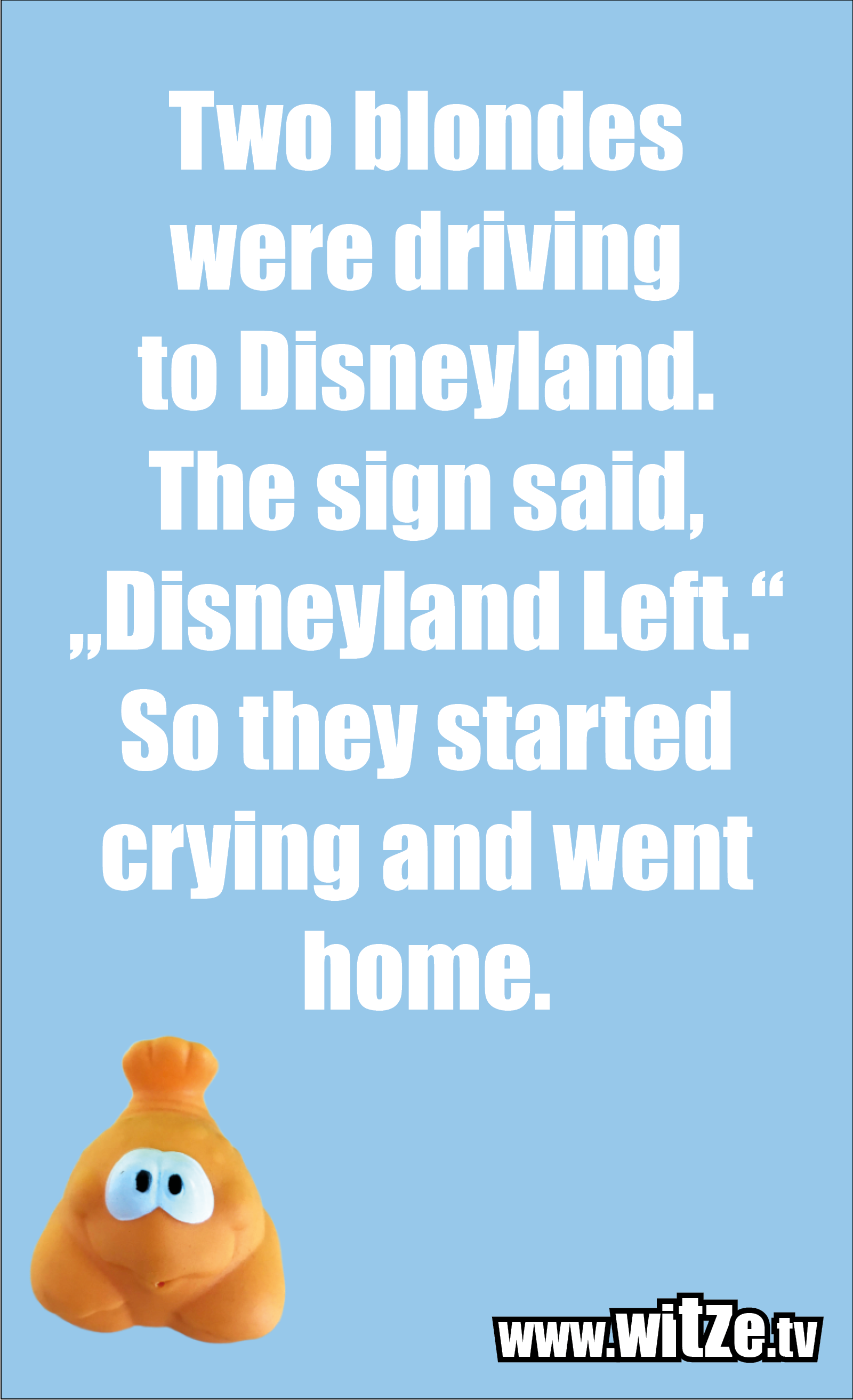 Two blondes were driving to Disneyland. The sign said, “Disneyland Left.” So they started crying and went home. 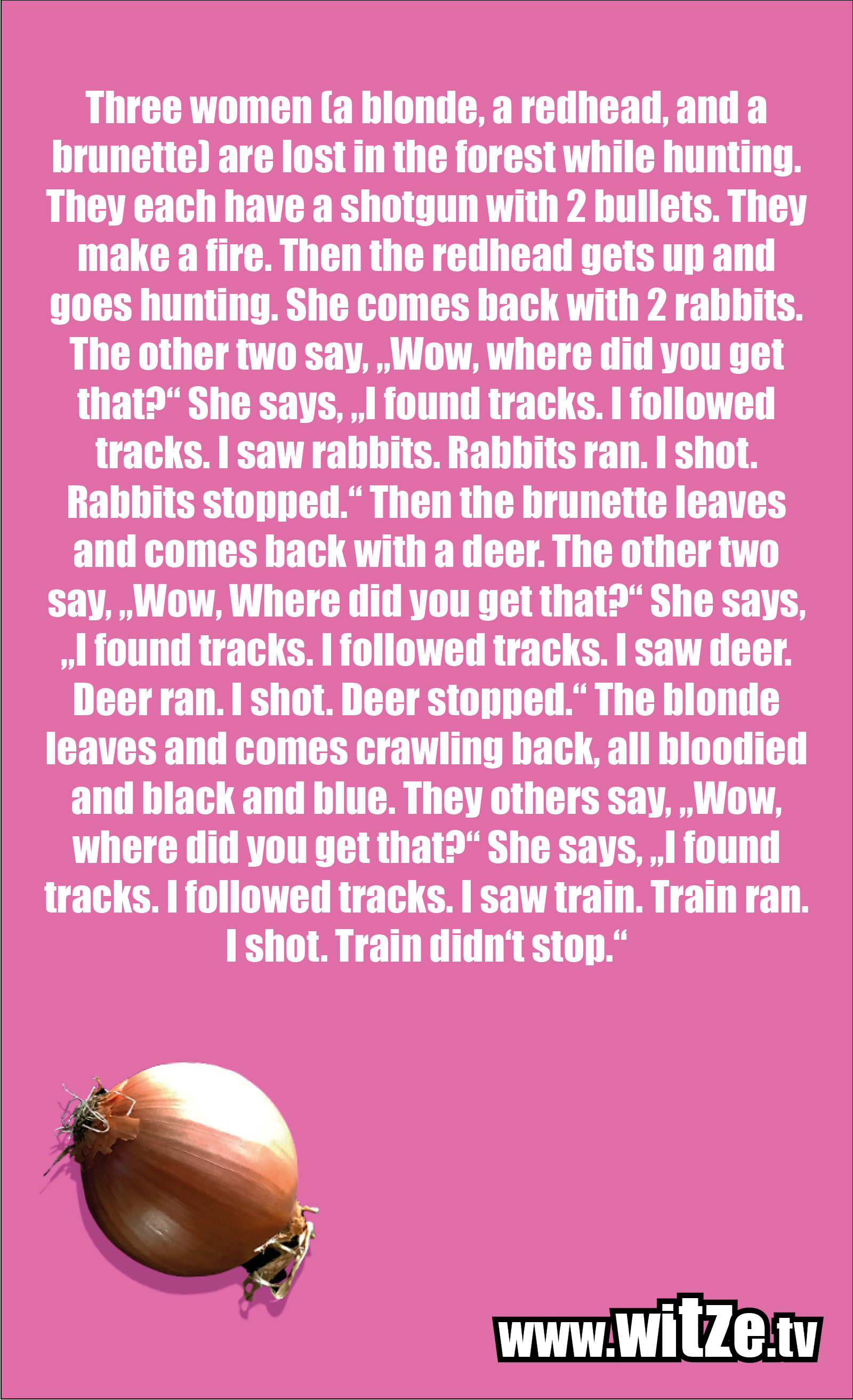 Three women (a blonde, a redhead, and a brunette) are lost in the forest while hunting. They each have a shotgun with 2 bullets. They make a fire. Then the redhead gets up and goes hunting. She comes back with 2 rabbits. The other two say, “Wow, where did you get that?” She says, “I … Read more 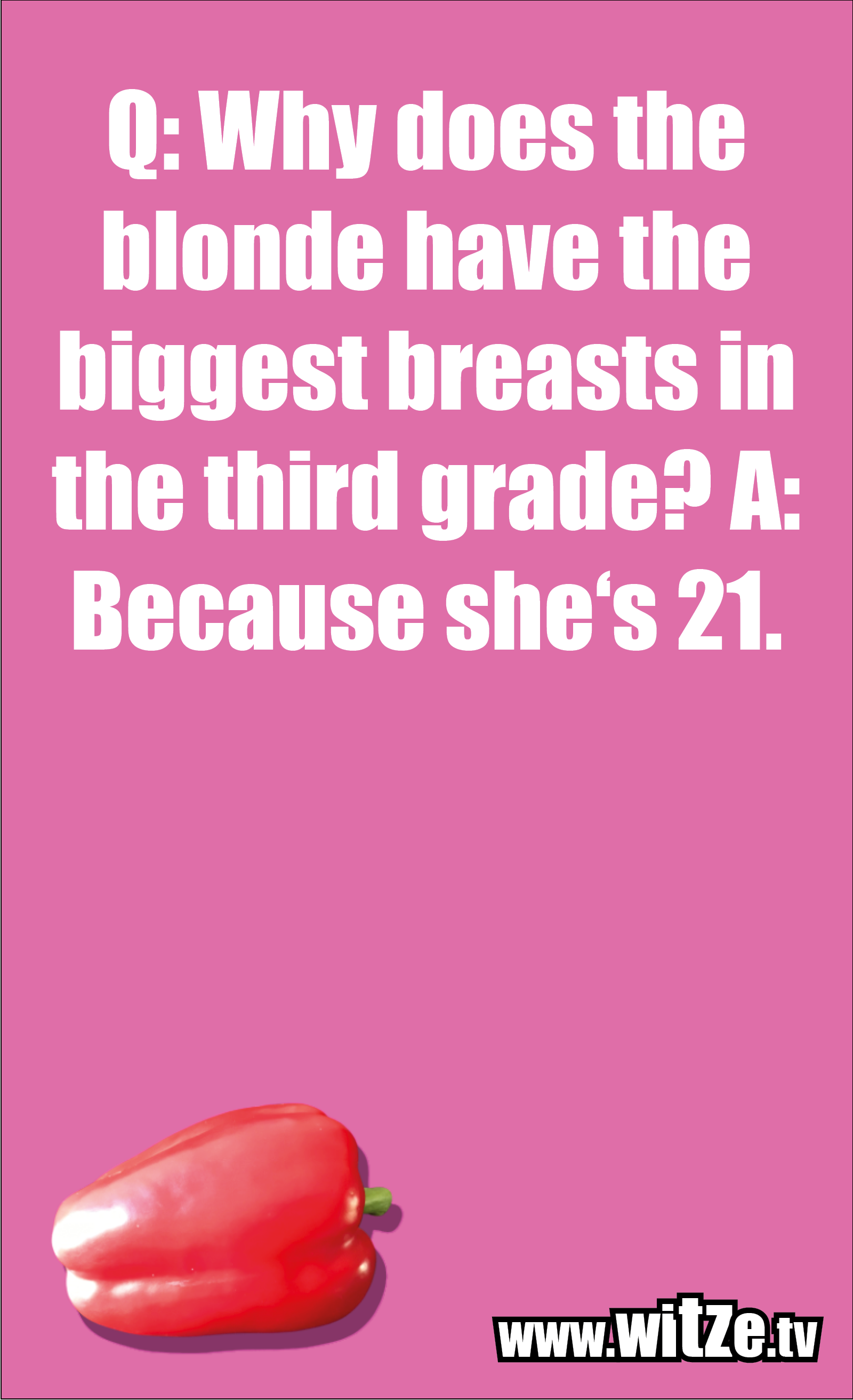 Q: Why does the blonde have the biggest breasts in the third grade? A: Because she’s 21. 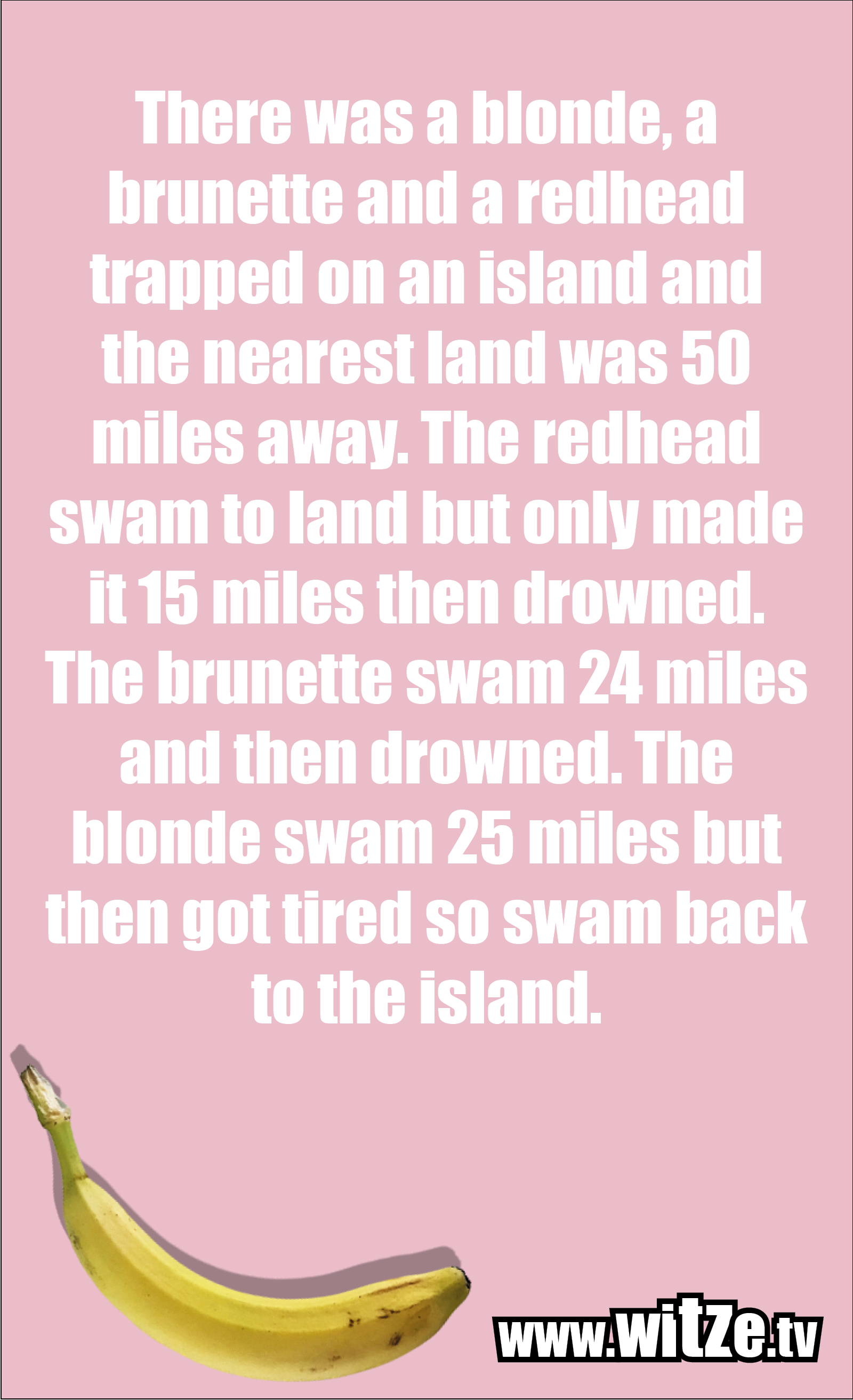 There was a blonde, a brunette and a redhead trapped on an island and the nearest land was 50 miles away. The redhead swam to land but only made it 15 miles then drowned. The brunette swam 24 miles and then drowned. The blonde swam 25 miles but then got tired so swam back to … Read more 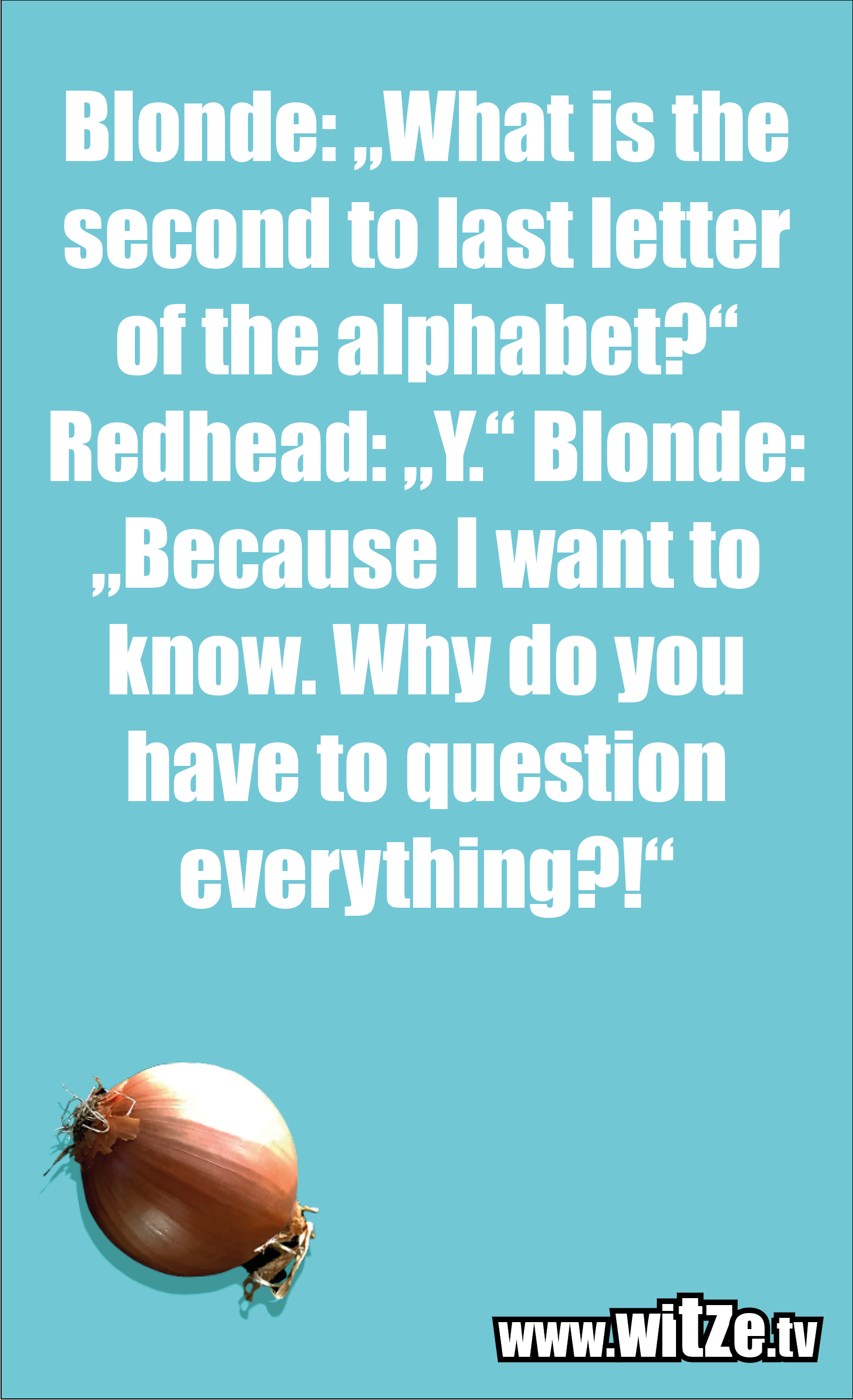 Blonde: “What is the second to last letter of the alphabet?” Redhead: “Y.” Blonde: “Because I want to know. Why do you have to question everything?!” 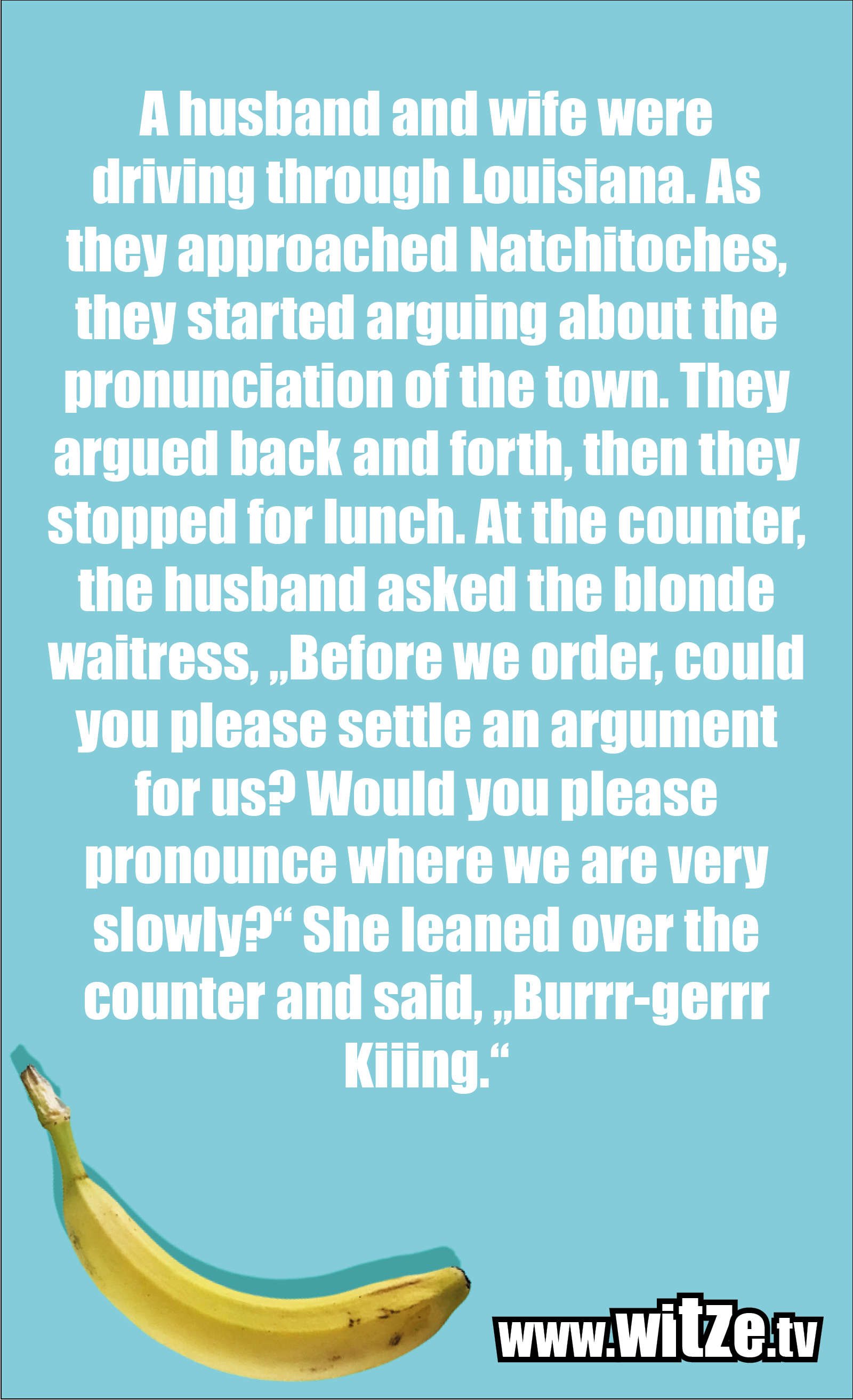 A husband and wife were driving through Louisiana. As they approached Natchitoches, they started arguing about the pronunciation of the town. They argued back and forth, then they stopped for lunch. At the counter, the husband asked the blonde waitress, “Before we order, could you please settle an argument for us? Would you please pronounce … Read more 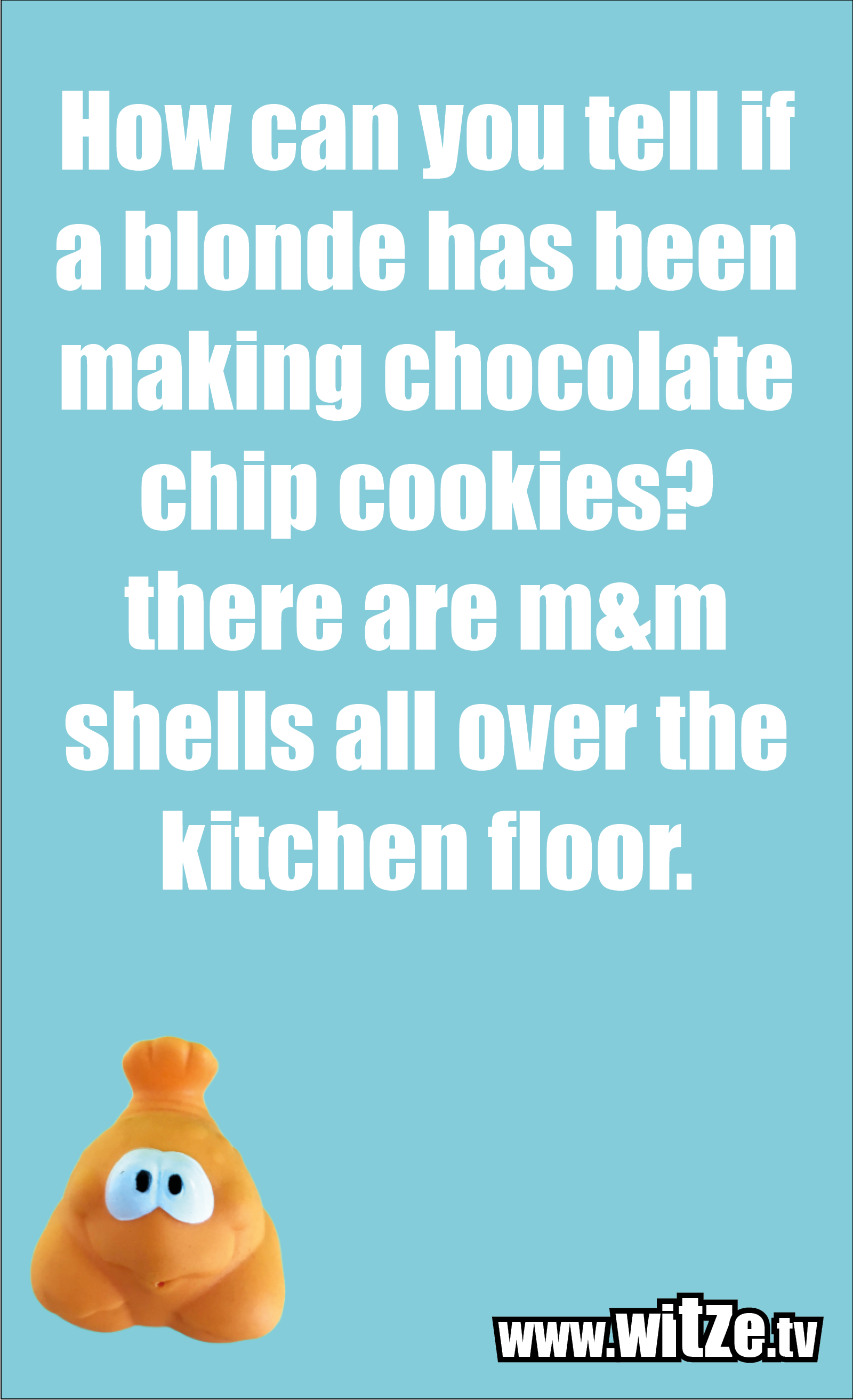 How can you tell if a blonde has been making chocolate chip cookies? there are m&m shells all over the kitchen floor. 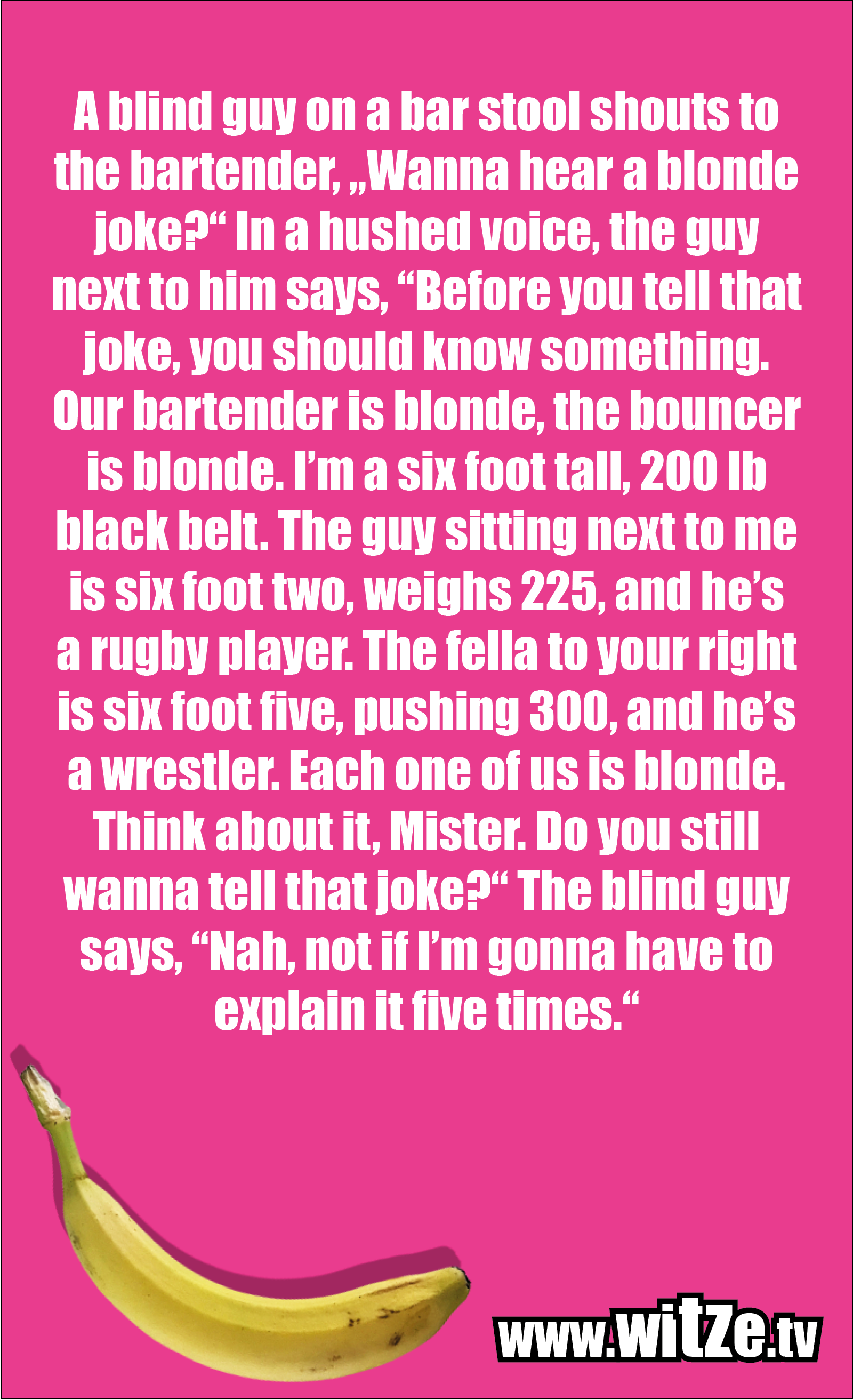 A blind guy on a bar stool shouts to the bartender, “Wanna hear a blonde joke?” In a hushed voice, the guy next to him says, “Before you tell that joke, you should know something. Our bartender is blonde, the bouncer is blonde. I’m a six foot tall, 200 lb black belt. The guy sitting … Read more